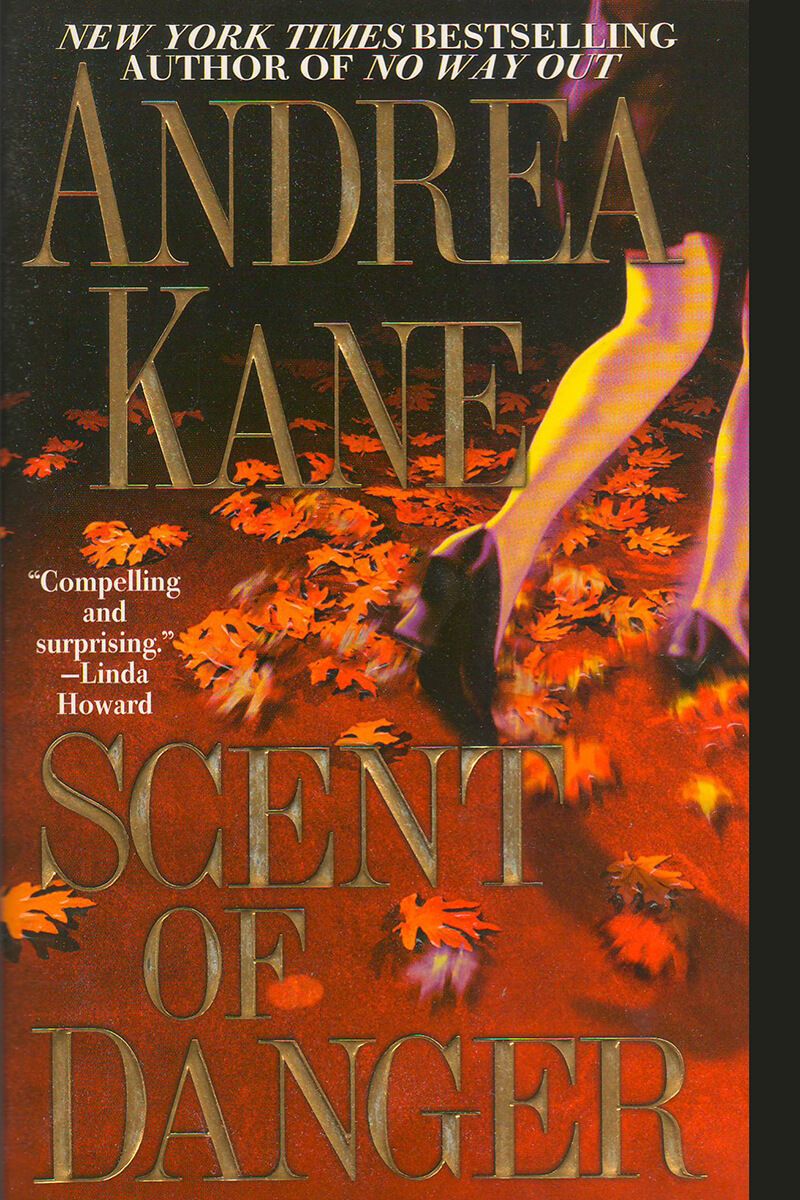 Scent of Danger
by Andrea Kane

When Dylan Newport, a high-powered attorney for the company that manufacturers C'est Moi-- the revolutionary fragrance that makes women irresistible to men-- finds his boss, Carson Brooks, shot and nearly dead, he sets out to fulfill what may be the billionaire CEO's last wish: to find out whether a business deal he made twenty-eight years ago to start his company also resulted in his fathering a child.

Dylan's search leads him to Sabrina Radcliffe, a brilliant management consultant who is shocked to learn her father's identity. Yet when she meets Carson face-to-face, there's an instant connection. His appointing her interim CEO is the opportunity of a lifetime, until she becomes the target of his enemies. As suspects-- and victims-- begin to pile up, Sabrina turns to Dylan and finds that their own perfect chemistry is kindling into soul-deep desire. But first they must confront an elusive adversary intent on destroying everything-- and everyone-- they cherish.

He never saw his assailant. Never heard him. Only the pop from behind. An instant later came the burning heat in his back. He pitched forward at the panorama of windows he'd been facing when the attack occurred. He broke his fall by planting a palm on the wall, bracing his weight long enough to twist around and scan his office doorway.

Empty. Whoever had done this was gone.

Pain lanced through him, and weakness invaded, spreading through him in widening bands. His legs gave out. He crumpled to the carpet, trying to grab onto his desk for support. His fist clutched nothing but air.

He landed on his belly, his arms doing little to cushion the fall. Automatically, he turned his head to one side to protect his face and make breathing possible. It didn't do much good. He couldn't seem to bring in enough air. And when he did-- Christ, the smell of the oriental rug made his stomach lurch. Sickeningly sweet, like a suffocating air freshener. It was that cleaning stuff the maintenance staff used. One more whiff and he'd puke.

He shifted a bit, resorted to breathing entirely through his mouth. The rug was wet, he noted, and getting wetter, saturating through with something sticky. My blood, he thought vaguely, feeling oddly detached as the fluid continued to seep from his body.

Cobwebs of dizziness blanketed his brain. He was losing consciousness, and he knew it. But there was no way to help himself. He couldn't move. Couldn't crawl to the door. His phone... the cord was dangling from his desk... no, he couldn't reach it. He'd try to yell... what good would that do? It was Labor Day. No one was in except him and Dylan. And Dylan's office was at the opposite end of the building. Making a racket would be futile. All he could do was hope that Dylan hauled his butt back here before it was too late.

Footsteps sounded, slowing as they reached the office.

"Okay, Carson, I've got those files you wanted. We can go over them later. Right now, it's time we got into that personal matter I... Jesus Christ!" Dylan's words ended on a strangled shout. He flung aside his papers and was next to Carson Brooks in a flash, squatting down beside him. "Can you hear me?" he demanded, groping for a pulse.

"And you're not going to be." Dylan bolted to his feet. "Don't try to talk. I'll get an ambulance." He snatched the telephone, punching in 9-1-1. "This is Dylan Newport," he reported tersely. "I'm calling from Ruisseau Fragrance Corporation, 11 West 57th Street. A man's been shot." A pause. "No names, no press. Just send an ambulance, and fast. Yes, he's breathing. But it's labored. He's conscious, yeah, but barely. And he's lost a lot of blood. Looks like his lower back." Another pause. "Right. Fine. Just get that ambulance here. Twelfth floor, back southeast corner office." He slammed down the receiver. "Lie still," he ordered Carson, squatting down again. "Don't try to move or talk. The paramedics are on their way."

Dylan said something in reply, but Carson couldn't make out his words. He felt as if he were floating outside himself. Was this how it felt to die? If so, it wasn't so bad. What sucked was all he was leaving undone, not to mention the big question mark in his life that would now die a mystery.

Twenty-eight years. Funny, it hadn't mattered until recently. And ironic that when he was finally about to act, the chance to do so was being snatched away.

"Dammit, Carson, stay with me!"

He would have answered Dylan. But his mind was drifting back to another time, twenty-eight years and a lifetime ago. That pivotal twist of fate had changed everything. A seed that had grown into an empire.

A seed. What an ironic metaphor.

One sperm specimen... twenty grand. No risk, no strings, nothing to lose. What a deal.

Stan had been right. It had been a deal, one that had changed his life. And maybe created another.

Carson, you've got it all. The IQ. The looks. The youth. The charm. Go for it. If she bites, you'll make a bundle.

She had. And he had.

He'd plowed forward from that day on. Never looked back. Not till a few weeks ago. Funny, how a fiftieth birthday made a man take stock...

"In here." Dylan's urgent reply as he led them in. "It's Carson Brooks."

His eyelids fluttered. Through a blurred haze, he made out two pair of uniformed legs hovering over him.

The paramedics squatted and began working on him.

"Blood pressure a hundred over sixty."

"That's very low for Carson." Dylan's lawyer-voice. Hard-hitting. Authoritative. Daunting even to his most formidable opponents. "His pressure's usually somewhere around one-fifty over a hundred. He suffers from hypertension. He takes Dyaxide to control it."

"Any other pre-existing medical conditions you know of?"

"Okay." Pressure on his back. His lids were lifted and pinpoints of light pierced his eyes. "Pupils dilated. Can you hear me, Mr. Brooks?"

"Good. Hang in there. We're just trying to slow down the bleeding."

"Start the oxygen. Set it at fifteen lpm. Let's get him on the backboard."

"Right." Two more paramedics had materialized in the room, and were now rustling around with some equipment.

Idly, Carson noted the intricate pattern of the oriental carpet. The floral configurations had more red in them than before. And the color was spreading.

An oxygen mask was fitted over his nose and mouth, its elastic strap secured behind his head. "Breathe normally, Mr. Brooks. This will help."

It did-- a little. He rasped in the oxygen. The air freshener smell grew faint.

"His pulse rate's dropping. And his heart rate's up. We've got to move him-- now." Another flurry of activity, and a long board was propped against his side. "Okay, on the count of three. One, two... three."

He heard his own groan as they maneuvered him onto the board and secured his head and body. The sound reminded him he was still alive. He had to stay that way. He had to find out who'd shot him. He had to protect his legacy.

And he had to know if Ruisseau was his only legacy, or if he had another one out there-- one that was a living, breathing human being.

Determination was suffocated by the fog enveloping his brain.

"Stay with us, Mr. Brooks." The paramedics were talking again. They'd lifted him onto a stretcher and were moving. They were racing him through the lobby toward the front door. Strange, he didn't remember the elevator ride down.

"Is he conscious?" Dylan grilled.

"In and out." The glass doors blew open. Thick summer air enveloped them. Manhattan pollution. A hint of it seeped around the oxygen mask and invaded his nostrils. There were flashing lights-- police cars flanking the ambulance. One cop rushed up to the paramedics. More ran into the building.

He was transported to the ambulance. "Mount Sinai?" Dylan was asking the paramedic who'd climbed in beside him.

"Yup. We'll get over to Madison and fly straight uptown. With the siren on, we'll be there in minutes."

"I'm riding with you." Dylan was getting in even as he spoke.

"Uh, Mr. Newport...." The ambulance driver turned and cleared his throat uneasily. "The police want to talk to you about..."

"Fine." Dylan cut him off at the knees. "Then they can meet us at Mount Sinai. I'm riding there with Mr. Brooks. That's not up for debate. And like I said, you're bringing in a `John Doe'. No names, no press. Let's go."

There were no further arguments. Doors slammed. A siren screamed. The ambulance zoomed off.

"Heart rate's up to a hundred seventy. BP's down to ninety over fifty." The paramedic leaned closer. "Mr. Brooks, can you tell me how old you are?"

His voice mingled with the scream of the siren. The traffic on Madison Avenue seemed to part like the waters of the Red Sea.

"Carson." Dylan's voice was low, very close to his ear.

"I never doubted it. You're indestructible."

"Talking isn't what I have in mind for that bastard." A pause. "Did you see who it was?"

"Not that." A weak shake of his head. He was fading. For now or for good, he wasn't sure. But, just in case he'd be around to hear the answer, he had to try. "That situation... I was wrestling with... the confidential one..."

He swallowed, fighting the waves of darkness. "If I've got a kid... I want to know. Find out."