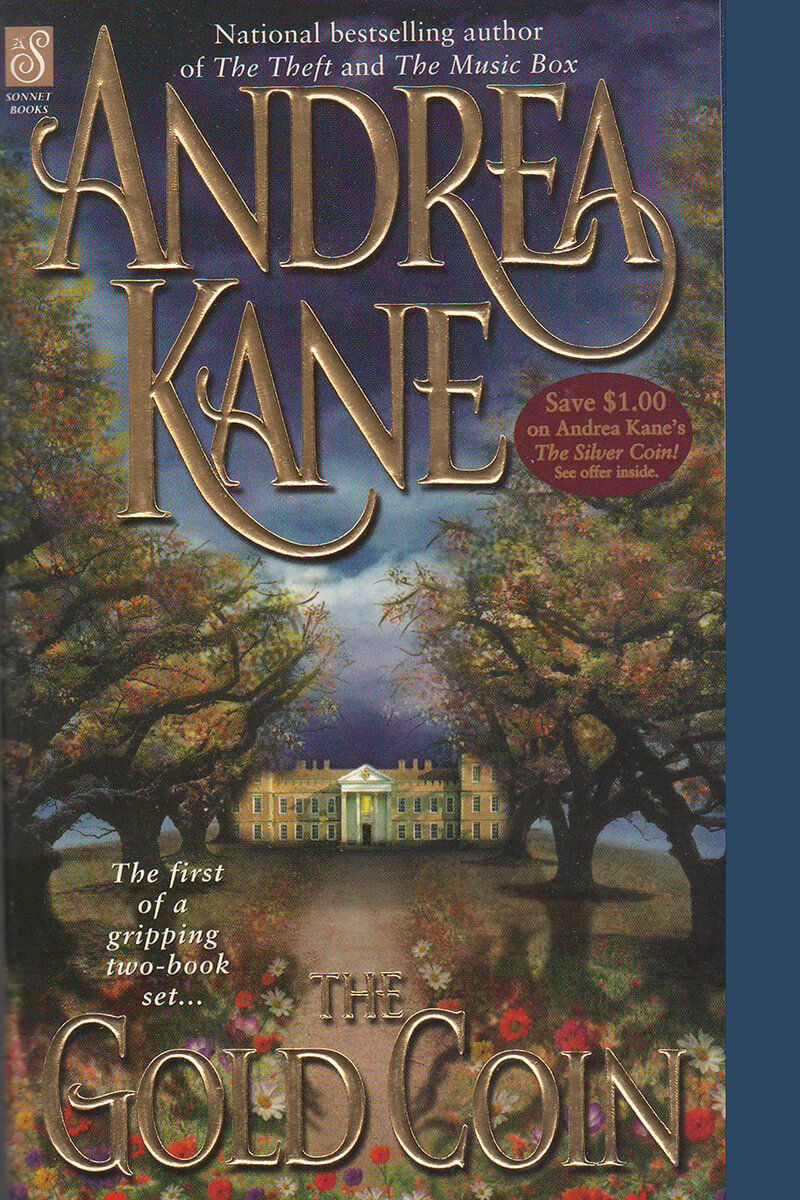 The Gold Coin
by Andrea Kane

As children, identical cousins Anastasia and Breanna Colby swore always to protect each other. Now that Anastasia's beloved parents have died, she has come to live with Breanna...and Breanna's father, whose raging temper has locked his daughter into a life of fear. What is more, Anastasia soon realizes that her uncle is involved in a sinister scheme that places both young women in deadly danger. Fearing most of all for her cousin, Anastasia turns to the only help she can think of, the man who holds the reins to her considerable fortune-the fascinating, enigmatic Damen Lockewood, Marquess of Sheldrake.

From the moment Anastasia and Damen meet, blazing passion flares between them. But in the face of overwhelming peril-and threats on Anastasia's life-thoughts of love cannot be indulged. Not unless the mystery that entraps them is solved will they at last be able to pursue the future their feelings command them to share. But is the danger stalking them really gone?

Family. That was even more important than personal accomplishments, not only to Grandfather, but to her. But what if one was integrally tied to the other? What if accomplishing a feat was the first step in carrying on a lineage, perhaps even in restoring ties that should never have been broken?

Anastasia massaged her temples, contemplating not only her immediate goals-- ones that would pay tribute to her father, unite and expand Colby and Sons-- but the enormous sum of money Grandfather had left her and Breanna. Could they put that money to work in order to do their grandfather justice, to reap the rewards he was determined that they reap-- not only for themselves, but for their children, their future?

If tonight was any indication, then Anastasia feared Grandfather's hopes and dreams would fall by the wayside.

Dear God, what if she let him down?

Damen Lockewood strolled out onto the balcony, coming up to stand beside her. He leaned his elbow on the railing and angled himself to face her. "You're discouraged. After twelve fruitless efforts, I can't blame you."

Anastasia continued to stare off into space, hovering somewhere between dejection and nostalgia. "Have you come out here to gloat?"

"Hardly." He fell silent for a moment, studying her profile intently as he chose his next words. "Tell me something, my lady. Is your original offer still open-- the one regarding a potential partnership between us?"

Whatever Anastasia had been expecting, it hadn't been this.

She whirled about, her eyes wide. "What did you say?"

"I asked if your original offer still stands. Because if it does, if you're still interested in having me co-finance this venture of yours, I'd like to accept."

Pensively, she studied the marquess's face, puzzled and curious all at once.

What had prompted this total turn-around? she wondered. Certainly, not some absurd sense of gallantry. Not with a man like Damen Lockewood, who regarded business above all else.

Except perhaps loyalty. Was that it? Did the marquess feel a sense of commitment to her father, a responsibility not to let Henry's daughter falter?

If that was the case, she wanted no part of his charity.

"Why?" she demanded, giving voice to her thoughts. "Why would you change your mind so suddenly and completely-- out of duty? Pity?"

One dark brow shot up. "Neither. To begin with, I don't pity you. Doing business means experiencing disappointment, sometimes even coping with failure. What's more, even if I did feel sorry for what you're going through, I don't allow emotions to dictate my business decisions. And that includes loyalty to fine men like your father. Henry would laugh in my face if he heard me suggest investing in something I didn't believe in just out of respect for him. So, no, put those foolish notions out of your mind. I'm reversing my decision because it's prudent to do so."

Sheldrake lifted one shoulder in a careless shrug. "As it turns out, I spent the better part of last week researching your ideas. I made some inquiries, pored over long columns of numbers. And I discovered that you were right. I didn't give your proposal a fair chance. Well, now I'm ready to. If you're still interested."

Anastasia eyed him skeptically. "Why didn't you mention this change of heart before an hour ago when I went on my futile crusade to solicit backers?"

"Because I wanted you to explore all your options before I made my offer. After all, there was every chance you'd reject it at this point, given my initial response. Especially if you'd found someone else to finance your venture."

"Which I didn't." Anastasia frowned, contemplating another, equally important, question. "Let me ask you this: what if I say no? Will that preclude me from using my own funds to finance the bank? Will I have to wait until October, when you're no longer managing my inheritance, to get started?"

Lord Sheldrake's jaw tightened fractionally. "What you're effectively asking is whether or not I'd resort to blackmail. The answer is no. I don't do business that way. You'll have access to your funds immediately-- whether or not we form a partnership. I'll sign the necessary documents at my bank on the morning after this party ends. No strings attached."

"I see." Anastasia wet her lips with the tip of her tongue. "Forgive me if I insulted you. But I had to be sure."

"No insult taken-- this time. However, I don't expect my integrity to be questioned again."

"Fair enough." The first ray of hope she'd experienced all evening dawned inside her. "You really believe in my bank?"

"Our bank," Sheldrake corrected with a cocky grin. "At least if you accept my offer. And yes I do."

With visible relief and excitement, Anastasia extended her hand. "Then consider us partners."

"Splendid." Solemnly, he shook her hand, his fingers lingering far longer than necessary. "Tell me, now that we're partners, do you think we might dispense with the formalities?"

Anastasia swallowed, her pulse picking up speed. "Which formalities in particular, my lord?"

"The ones you just employed." His gaze held hers. "I believe it's fitting for partners to call each other by their given names."

"I suppose that makes sense."

"Good." Abruptly, his grip tightened, refusing to let go, and his stare delved deep inside of her. "When I first walked out here, you weren't only thinking about the bank, were you? There was far more on your mind."

Anastasia blinked-- startled by the abrupt change of subject, taken aback by the marquess's boldness and his insight. She had no idea what prompted her to answer. Perhaps it was the camaraderie of the past few minutes; perhaps it was the vulnerable state in which he'd found her or the compassion she heard in his voice.

Or perhaps it was the heat that emanated from their joined hands.

In any case, she stared at his strong fingers wrapped around her slender ones and replied, "Yes, I was pondering far more than the bank. I was thinking about many things-- my grandfather, my father, how much I missed Medford Manor while I was away, how much I still..." She bit her lip, then blurted out, "Is it possible to miss home even when you're right there in it?"

Slowly, Anastasia tilted her face up to his. "You're a very perceptive man, Lord Sheldrake."

"Damen," he corrected. "And you're a very intriguing woman, Anastasia."