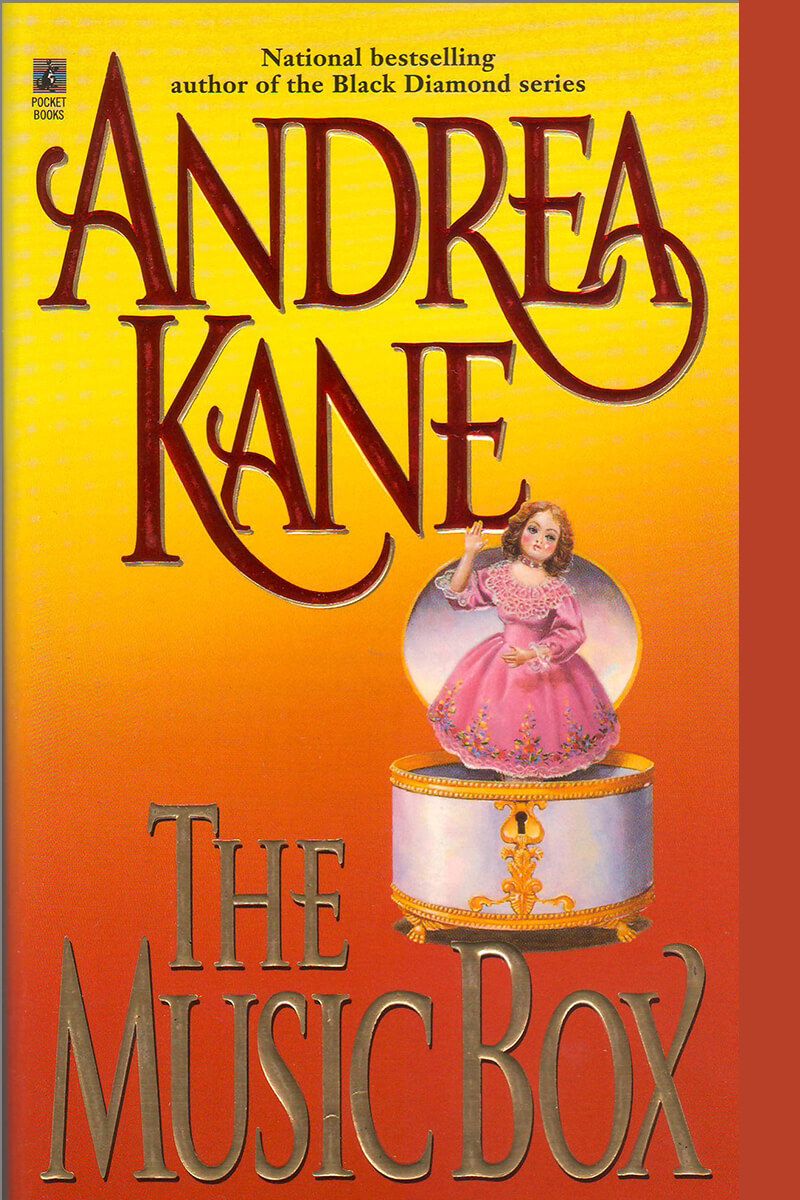 The Music Box
by Andrea Kane

Gabrielle Denning, the sheltered ward of Lady Nevon, grew up in an almost magical place, an estate where society's outcasts were treasured and the ruling spirit was love. It almost made her forget the terrifying night when an unexplained fire killed her parents, leaving her with only a music box to remember them by. But her idyllic world is about to change, as the bastard son of Lady Nevon's brother maneuvers his carriage up the manor's drive.

Outcast by his titled father, Bryce Lyndley has nonetheless flourished, becoming a renowned barrister ruled entirely by his principles. The meeting to which he has been summoned at Nevon Manor, however, could transform his life-and warm his heart. Amid unfolding secrets, his life and Gaby's will touch, awakening emotions as profound as the richest symphony. But if happiness is to be theirs, Bryce and Gaby must uncover a mystery from long ago, reawakened by the haunting notes of Gaby's music box...or lose all they cherish to treachery, heartbreak, and a murderer's nefarious plan.

The instant he recognized her, Bryce was on the move. Snatching his coat,he raced down the stairs and out the door, heading directly toward the area in which he'd spied her.

He stopped, his breath coming in short pants as he scanned the grounds, searching and listening all at once.

A twig snapped in the distance, and Bryce's head jerked toward the sound.

She was pushing away from an oak about thirty yards away, regaining her balance and stumbling on with a muffled cry.

If she heard him, she gave no sign, just continued to shove her way forward, her linen nightgown catching on branch after branch.

Bryce reached her in seconds. "Gabrielle." He seized her arm, but she yanked it free, her slender body trembling with cold, shaking with sobs.

"No!" she gasped, shaking her head wildly from side to side. "Oh, no." She pressed on.

"Wait." Bryce reached for her again, only to hear her cry out in pain, tumble to the ground.

"Gaby." He knelt beside her, genuine fear knotting his chest. Tumbled waves of hair draped over her shoulders like a dark curtain, shielding her face from view. But the reason for her cry was obvious without seeing her expression; her feet were bare and badly cut from the twigs and acorns that covered the ground. "You're bleeding," he murmured, smoothing her hair away as sobs wracked her body. "Why in God's name are you..." He broke off, as she began wrestling to her feet again.

"Mama... Papa... No..." Her words were garbled, but chillingly recognizable.

"Gaby." He caught her by the waist, dragging her against him.

She was clutching an object to her chest. The glistening alabaster color, the size, the shape-- Bryce knew immediately it was her music box.

Gazing into her face, the vacant look in her eyes, Bryce realized with a sickening sensation that she was asleep. "Gabrielle." He touched her cheek tentatively, unsure how to calm her, less sure how to awaken her. "Sweetheart, wake up."

"Please... no..." she choked out, her small fist striking his shoulder in an attempt to free herself. Papa..."

"Gabrielle-- wake up." Abandoning his experimental attempts, Bryce shook her-- hard-- gripping her arms and holding her firmly against him. "It's Bryce. Open your eyes, please."

She gasped, then blinked, the emptiness in her eyes replaced by bewilderment. Like a lost child, she stared up at him, trying to establish her whereabouts, to regain control of reality. "Bryce?" she asked, her teeth beginning to chatter.

"Yes." He sat back on his haunches, cradling her against him while he tugged off his coat, wrapped it around her quaking shoulders. "It's all right. You're all right."

"Where are we?" She gazed about, assessing the grounds. Abruptly, her head snapped down and she took note of her attire, the music box she clutched. "Oh, God," she choked out, before Bryce could even begin to formulate a credible and soothing explanation for the past few minutes. "I was walking in my sleep. Again. After all these years. Oh, no." She bowed her head, tears streaming down her cheeks, drenching his shirt.

It had happened before, he realized with a start. Not now, but a long time ago. And it didn't take a scholar to guess when-- or why.