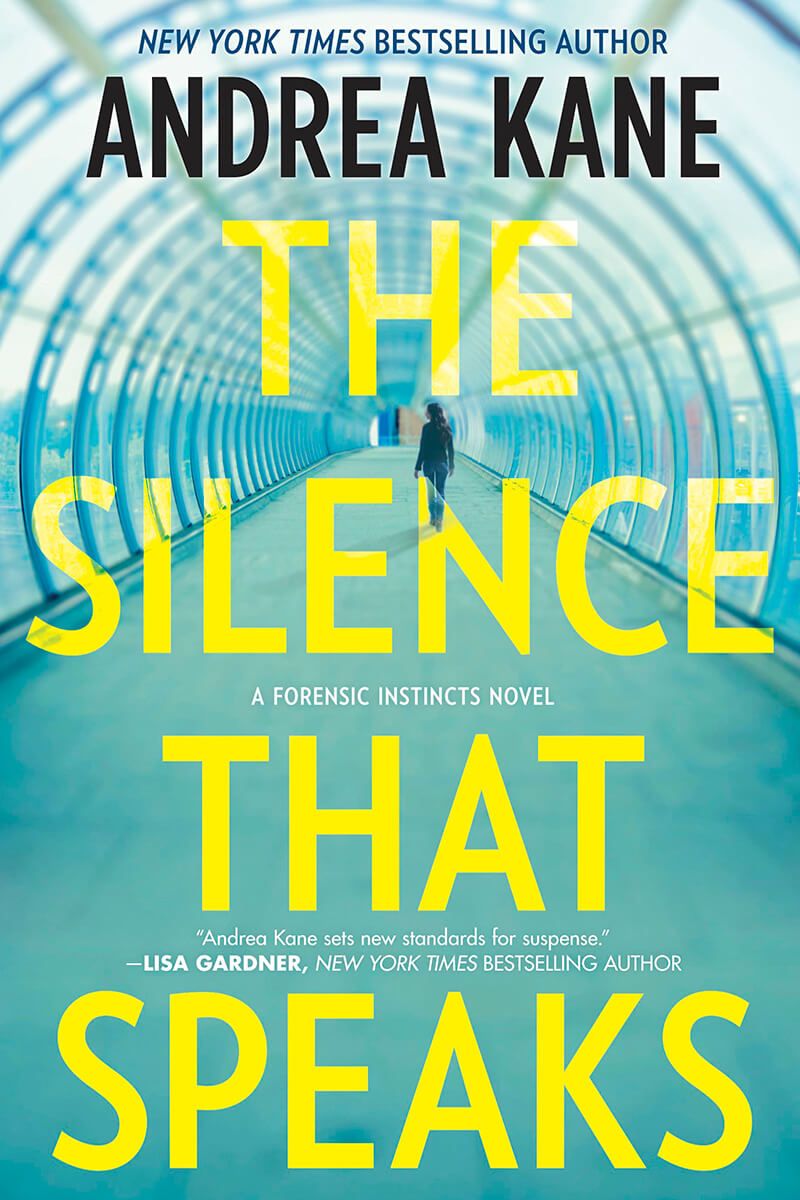 The Silence That Speaks
by Andrea Kane

Forensic Instincts' first order of business is to find out who's targeting their client. Under the leadership of Casey Woods, the investigative team has the resources to do that, working inside the law—and outside it. FI's strength is its members, among them Casey's associate Marc Devereaux, former Navy SEAL and a man who's equal to any situation.

Except maybe this one…

Madeline's case hits too close to home for Marc. She's the only woman he ever loved, and she's his only weakness. Madeline feels the same way about him. Now a nurse at Manhattan Memorial, she's terrified because someone is trying to kill her. So she turns, reluctantly, to Marc and FI for help and protection.

Meanwhile, Manhattan Memorial is in turmoil. With a merger in the works, the staff is still haunted by their hospital administrator's sudden death—during heart surgery performed by Madeline's ex-husband, Conrad. A surgery at which Madeline was present. The death was assumed by some to be accidental, and by others, Conrad's intentional doing. The killer seems to blame both Madeline and Conrad…

With a growing list of suspects—from the grieving widow, to a long string of scorned lovers, to professional enemies of Madeline and Conrad's—Forensic Instincts will have to figure out who has the greatest incentive to get rid of Madeline in order to protect a deadly secret… whatever that secret may be. And FI has to work fast to save her—before she's permanently silenced.

It was late at night, and chilly for the beginning of November. She'd turned up her coat collar, and was waiting to cross Park Avenue at East Eighty-Eighth Street. Lost in thought, yes, and with more than enough reason these days. She was an emotional wreck. But navigating between pedestrians, taxicabs and speeding motorists was second nature to her. She'd been a Manhattan resident for most of her life.

She'd watched for the Walk sign to flash from red to green. Even then, she'd paused briefly to glance around.

The crosswalk was still.

She took her initial steps into the street.

The screech of tires was her first warning. Then came the flash of motion from her peripheral vision.

Her head snapped around, and she came to a dead stop, staring like a deer in the headlights. A black SUV was roaring in her direction. It veered sharply at her, leaving no doubt that its goal was to hit her head-on.

Self-preservation kicked in. She lunged away, hurling herself backward and crashing to the sidewalk, a pile of wet leaves doing nothing to cushion her fall.

The impact of her body slamming against the concrete rocketed through her. Her head struck the ground?hard. She cried out in pain, saw stars.

Somewhere in the dim recesses of her mind, she heard the screech of brakes and the sharp swerving of tires, and the terrifying thought occurred to her that the driver was going to try again.

“Miss, are you all right?” a gravelly male voice inquired as the man it belonged to rounded the corner.

Madeline had never felt such great relief at the sound of another human voice. She looked up to see an elderly gentleman, with a full head of white hair and a lined face, holding a leash. The Brussels griffon at the other end of the leash was eye level with her. He trotted over to take a sniff.

“No, Max!” the man said. He was staring down at Madeline, his forehead creased in concern. “Did you trip? Can you move?”

He hadn't seen what happened. He wasn't a witness.

As Madeline opened her mouth to speak, she heard the SUV's engine roar in the distance as it sped down Park Avenue.

“I…” She shifted her weight and winced. Her right side was killing her. Her head was throbbing violently. And “Max” looked like two dogs, not one. Double vision. A concussion. Not to mention some major bruises?possibly even some broken bones. As an RN, she recognized the signs.

Seeing the agony in her eyes, the man reacted.

Madeline nodded her thanks. She tried again to move, and was rewarded with jolts of pain. She inhaled sharply, causing shooting pain in her chest. So she lay there quietly and waited.

The ambulance seemed to take forever to arrive. Maybe it was the pain talking. Or maybe it was her nerves. But she finally saw the red whirring light and heard the siren. Lenox Hill Hospital was nearby. That's where the EMTs would transport her. It wasn't the hospital she worked in, but she did know some people there.

Not that it mattered. She passed out as they arrived at the E.R.

When she came to, she was in a hospital bed with a bandaged arm, a taped midsection and an ice pack resting on her hip. Her head felt like a jackhammer was splitting it in two.

She lay there for a moment, willing her mind to work. Then she remembered what had happened and everything inside her tensed up.

It hadn't been an accident. It was attempted murder. That SUV was gunning for her. The cops wouldn't believe her story. Why would they? They hadn't believed her the first time. And that had only been a robbery. Now someone wanted her dead.

She flinched, knowing she had a concussion, a few broken ribs and a badly bruised hip. She wished she had some painkillers?anything to take away the throbbing and to knock her out. She wanted to sleep. She knew she couldn't. Not yet. Not until the doctor saw her and checked out her neurological responses.

She'd be here overnight. They'd keep her for observation. Then, if she remained stable, they'd let her go home.

A wave of panic set in, followed by utter resignation. She couldn't do this alone, not anymore. She'd put off the inevitable for as long as possible. It was time to get help?and from a specific source.

Seeking out that source was going to be even more painful than her injuries.