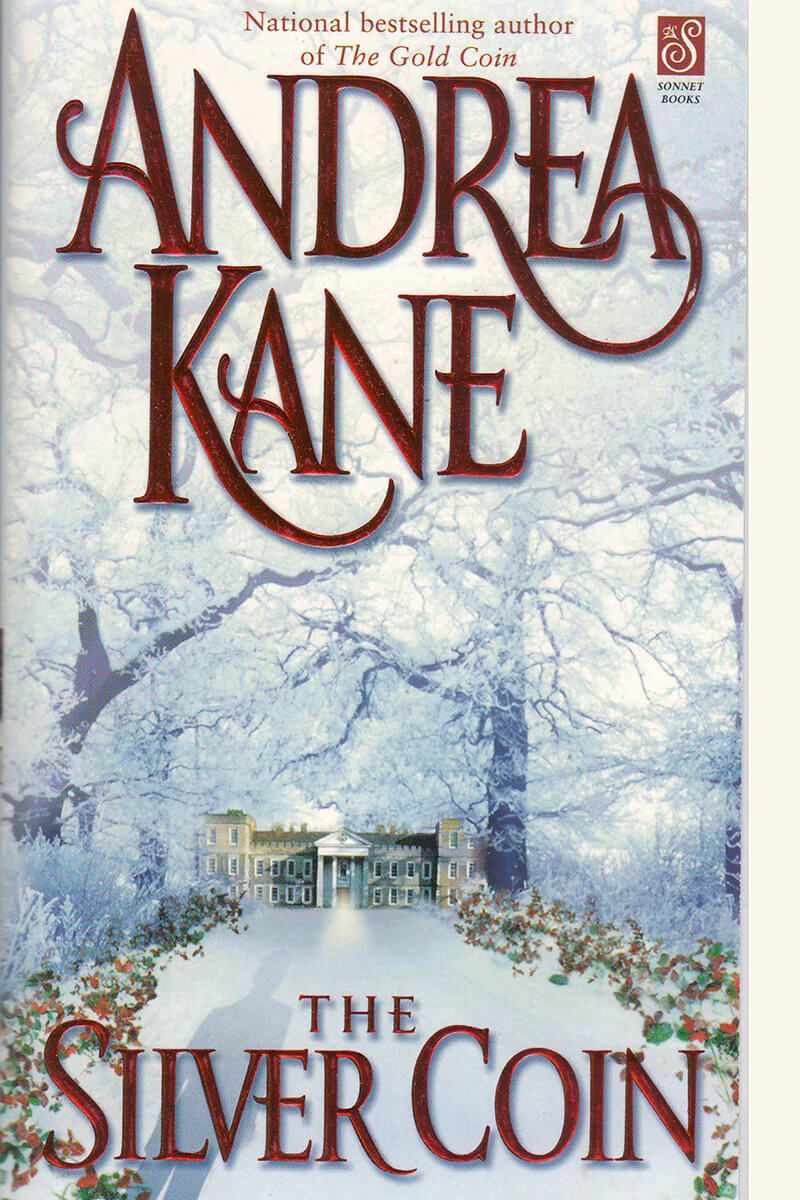 The Silver Coin
by Andrea Kane

All her life, Breanna Colby has lived on the precipice of fear, her only joy the recent reunion with her beloved cousin Anastasia. With her violent father now locked away in jail, the repressed young woman can emerge from her cocoon and pursue all the joys she's been denied. But she finds -- to her terror -- that not all the shadows have lifted, and an evil from the past stalks both her and Anastasia.

When authorities are unable to help with this assassin lurking in the darkness, the Colbys turn to the brilliant, unconventional Royce Chadwick, England's foremost expert on finding people who don't want to be found. Hard, detached Royce has always been a loner who operates by his own set of rules. He has little patience for weakness. Delicate Breanna Colby is an eye-opener to him, for beneath her fragile exterior ties a core of steel. As the two face overwhelming danger side by side, Royce discovers a woman he never dreamed existed -- one who, despite his cynicism, he is losing his heart to. But their future together can never be -- not unless Royce kills the assassin before the assassin kills them.

"So far, so good," Royce murmured.

Breanna blinked, finding it suddenly difficult to focus on his face. "What's so far, so good?"

A corner of his mouth lifted. "Your party. The fact that there haven't been any unwelcome guests all day, nor thus far tonight."

"Oh." She nodded, wishing the punch had done more to eliminate the knot of dread this topic incited.

Royce seemed to sense her distress, because he frowned. "I'm sorry. I didn't mean to bring up this subject. You've been living with it too much as it is."

"That's your job. Besides, it's not something I can forget."

"Maybe you should-- at least for a while." Abruptly, Royce halted, capturing Breanna's elbow and drawing her off the dance floor.

She blinked, wishing she weren't so dizzy and puzzling over how two and a half glasses of punch could wreak so much havoc. "I felt fine before," she announced.

"It takes time for the spirits to hit." Royce guided her forward, and she felt a blast of cold air strike her face and arms. Abruptly, she realized they were standing just outside the French doors. "Come with me," he urged. He led her onto the balcony, nodding as they passed the guards. "Lady Breanna and I are going to get some air," he said quietly. "We won't go far. And I have my pistol."

"Where are we going?" Breanna asked, stumbling a bit and wrapping her arms about herself as her teeth began to chatter. "It's cold."

"I know. The cold air is good for you." Even as he spoke, Royce was shrugging out of his coat. He wrapped it around her, covering her bare arms and enveloping her in a layer of woolen warmth. "Better?"

"Yes." She felt odd, like she was floating, gloriously numb to the anguish of the past weeks. "I think I'll drink more often," she announced.

Royce chuckled, snaked an arm about her waist as she teetered on her feet. "I wouldn't suggest it. You don't hold your spirits too well."

"I guess not. A bit of fruit punch and look what happens to me."

"Fruit punch?" Royce echoed dryly. "There are several bottles each of Madeira and champagne in Regent's punch, not to mention a pint of rum, and a quart of brandy. No wonder you're foxed." He scanned the area, led her over to a small rock garden that was lined with shrubs-- enough to ensure privacy but not isolation-- and came complete with a small, outdoor bench. "Sit."

"All right." Breanna sank down, leaning her head back and staring up at the sky. "The stars are waltzing."

She didn't smile. "You're mocking me. I'm not too foxed to realize that. I suppose I can't blame you."

"I'm not mocking you." He stood beside the bench, hands clasped behind him as he stared off into the darkness. "I'm teasing you. I want you to smile."

She twisted around to look up at him. "And how would you know that?"

"Oh." Breanna's heart gave another of those little skips, and she wondered if Royce realized how excruciatingly charismatic he was, how powerful an effect he had on women.

"Royce?" she tried, finding it wasn't so hard to say his name after all.

"H-m-m?" His smile told her he approved.

"Margaret wants you." She blurted it out without preliminaries or warning-- even to herself. "She asked me to put in a good word for her." Pausing, Breanna's brow furrowed in thought. "I should do that."

Another chuckle, this one husky. "Should you?"

"Yes. And quickly. Because Margaret has a great deal of competition. Apparently, dozens-- scores of women-- want you." Even as she spoke, Breanna wondered who in God's name was saying those things.

Royce's question, uttered with a fierce but quiet intensity, penetrated her clouded mind, made it swim even more. Her head dropped back against the bench-top, and she stared blindly into the night, struggling to regain her senses. "Your eyes are that color," she noted in a whisper. "That same midnight blue. Almost black. Ebony with a sharp tinge of color--color that makes them all the more riveting. It's hard to look away from eyes like that."

"Breanna." He was standing in front of her. He caught her arms, drew her to her feet, and tilted up her chin with his forefinger. "Answer my question."

She wet her lips, felt the coat he'd enveloped her in slip from her shoulders, topple to the bench. Odd, but she was no longer cold. "It's not fair of you to ask me hat," she murmured. "Not when I'm foxed."

"You'd never answer me if you weren't."

She couldn't deny the truth of that. "You're right." Stunned, she watched her own gloved fingers reach up, trace the hard curve of his jaw. "I wouldn't answer it. I also wouldn't do this." Her fingertips brushed his lips as she'd longed to do before, felt their warmth even through her glove. "Let me ask you the same question, my lord."

"Royce," he corrected her, his voice even huskier than it had been before. "And go ahead."

Sparks glittered in his midnight eyes. "Yes, I want you. You have no idea how badly. More than I realized. Much more than I should." He turned his lips into her palm. "Does that answer your question?"

He kissed the pulse at her wrist.